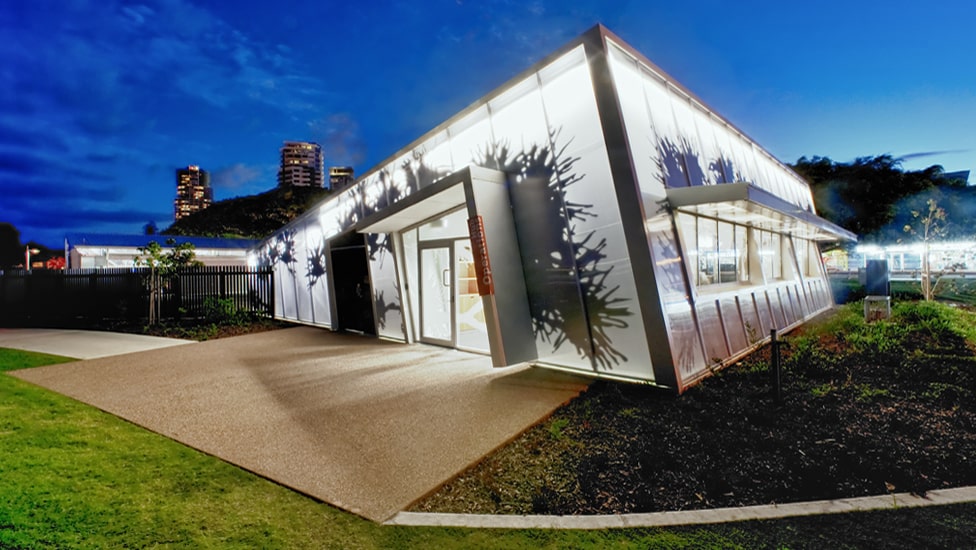 In September 2010, the Hub workshop and administration buildings were constructed. They were completed in the second stage of a massive $17 million redevelopment of the Southport Broadwater Parklands.

The Hub was constructed in the shape of a lantern emerging from the Parklands. The illusion of the lantern brings creativity, playfulness and a sense of wonder to the site while also satisfying practical needs in innovative ways. Architects Simon White and Jeff Brown of WHITEARCHITECTURE are known for their effortless abilities to combine both the natural environment and contemporary design into their projects. The duo’s values and style were embodied in the project through the Hub’s design, homage to local flora, and use of innovative, environmentally friendly materials such as Danpalon® panels. The wide choice of colours offered by Danpal helps to inspire architects.

WHITEARCHITECTURE was tasked with the challenge of creating a spectacular world-class design for the site in anticipation of the 2018 Commonwealth Games bid. The Parklands were subsequently used for all five Triathlon events at these Games, including the first ever Para Triathlon in Commonwealth Games history. With 1.2 million ticket holders at the Games, the Broadwater Parklands were on show to the world.

The Danpalon® translucent façade around the exterior of the building complement their natural surroundings during the day and see the building transform into a glowing lantern emerging from the earth at night. Vinyl graphics in the shapes of Pandanus (a tropical tree local to the area) were positioned on the backs of the façade. The graphics are highlighted with daylight radiating through them during the day.

Danpal façades have been proven in Australian conditions for decades. The strength of the façades can withstand any stray sports equipment or other incidental contact. Danpalon® polycarbonate panels do not shatter in the way that conventional glazing can. Unique protective lacquers are available for highly exposed situations if necessary. The strength and durability of Danpal systems are just two of the reasons they are market leaders throughout Australia and around the world.

The timeless beauty of The Hub was recognised by the industry twice in 2011. A regional commendation in Urban Design was awarded by the Australian Institute of Architecture and it was also awarded the Queensland commendation for Small Project Architecture. 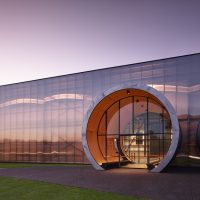 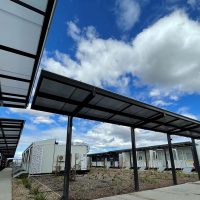 The Curve of Form and Function 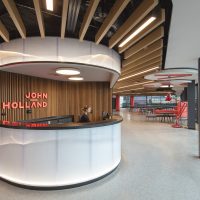